We have had a lovely week this week in our learning. We have worked incredibly hard and we only have 4 more weeks until the end of the half term!

In our Maths learning this week, we have started our unit on fractions. We have been learning about halves and quarters this week. We started by cutting objects into half by using playdough. We then cut shapes into halves. We also found half of amounts by sharing objects into two equal groups. Can you find half of these amounts by getting the number of objects and sharing them across two groups? We then moved onto quarters and we cut shapes out of playdough. We learnt that to quarter objects, we can half and half again!

In our English learning this week, we have moved onto our new unit on poetry this week! We have been learning the poem of the Nut Tree by Julia Donaldson. It is a beautiful poem about how a nut can become a tree. We have been: been drawing story maps, boxed up the poem, and created rhyming words that go with the poem. Below is the story map - can you tell a grown up the lines of the poem? Make sure to include the rhyming words! 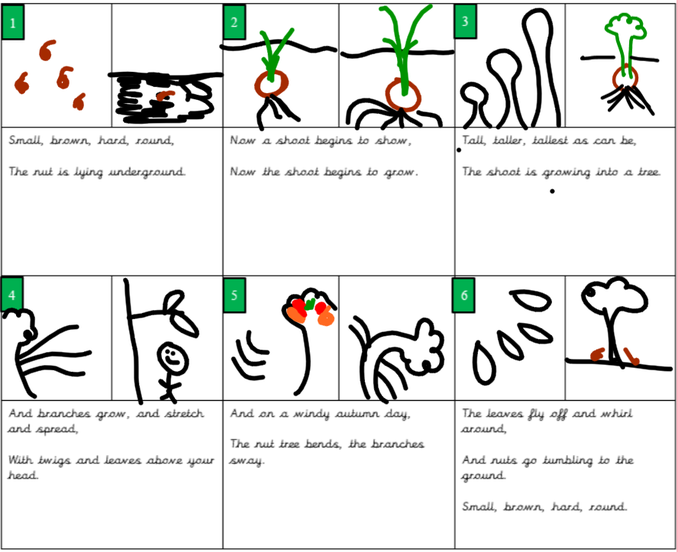 We have finished our week on senses this week. On Tuesday, we did a fun, but scary, tasting experiment where we had to be blindfolded and use our sense of taste to determine the flavour of foods, and to work out what the foods were. The children loved it! Can you tell a grown up about some of the foods that you tasted? What did they taste like? Were they bitter, sour, sweet and salty?

We also did a lesson on our sense of hearing. We tested the volume of different musical instruments in the class and we used a decibel meter to record which instrument was the loudest. We also learnt that sound is made up of small vibrations that enter the ear drum. Can you tell a grown up what loud instruments you listened to this week? Can you think of any instruments that can make a quiet sound?

This week, I awarded a RESPECT certificate, three LEAVES and a WRISTBAND. Well done this week!

Unfortunately not the ones with chocolate chips.

Some cookies are necessary in order to make this website function correctly. These are set by default and whilst you can block or delete them by changing your browser settings, some functionality such as being able to log in to the website will not work if you do this. The necessary cookies set on this website are as follows:

Cookies that are not necessary to make the website work, but which enable additional functionality, can also be set. By default these cookies are disabled, but you can choose to enable them below: